Car racing games have always been a popular concept in the video game industry since its early days. I am sure you all remember the 90s video game Road Fighter that ruled over people’s hearts for a very long time. If you are looking to have another similar adrenaline fest today, then you must try crazyDrivers which is available for Android phones and can be downloaded free of cost from the Play Store.

The basic concept of crazyDrivers is starkly similar to Road Fighter which is to reach the finish line by dodging and swerving through heavy traffic on a bumpy track. With improved graphics in tune with technological developments since the 90s but sporting a vintage-styled outlook, crazyDrivers brings forth the best of both the worlds. Not to say that the fonts and music seem to be straight out of Pulp Fiction that adds flavor to its action theme. To add an element of diversification, the makers of the game decided to include more than one mode. So, in the racing mode, you can experience the complete gameplay with all the achievements, obstacles, special modes, star coins and so forth. The bumper mode is relatively easier to play, as in this you can hit the other cars and obstacles without getting any damage done to your car except when you hit the bumper, in which case your car will explode. The grand tour allows you to race against 3 opponents in an 8-stage race. There are as many as 31 levels and 16 different cars to drive. The point is that with so many aspects to explore in the game, you will never get bored of crazyDrivers. 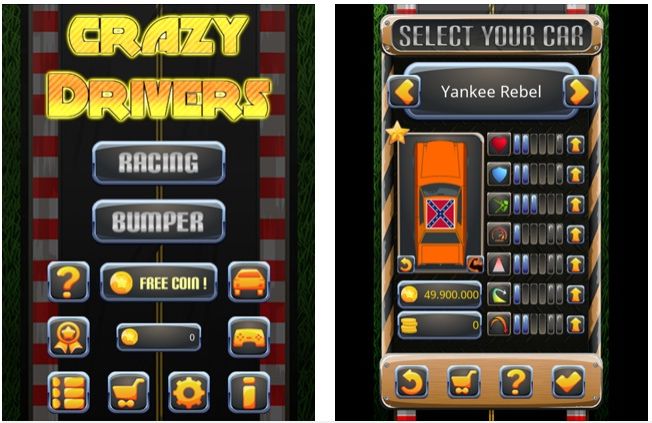 The controls are very easy, for all you need is one finger to press and hold on the screen to accelerate your car. Releasing your finger will apply the brakes. Simply slide your finger to navigate your car through traffic and other obstacles such as rock, crate, oil, buildings, and trees. Special modes are activated in the race to make the gameplay more engaging and challenging. For instance, in the destruction mode, your car will grow in size and you will be able to crush all the obstacles. The special modes last for a few seconds and are activated when the offensive bar is filled. Another factor that seems appealing is the different time zones and weather conditions offered in the game.

crazyDrivers is not a complicated video game. It is fairly easy to get used to its controls and has a simple objective. You have to collect star coins that can be used to unlock other cars as well as remove the advertisements. There are three kinds of coins in the game, each having a different value and at the end of the race, their aggregate value determines the number of star coins that you have collected. Although some people may find it a bit naive but keeping in mind the fact that crazyDrivers is targeted for those above the age of 3, the perfect balance of simplicity with an appropriate degree of challenge is praiseworthy.

To be honest, though, certain elements could surely be improved. For example, without an internet connection, the game goes into a limited mode and you cannot collect the star coins. Moreover, because the game doesn’t require any signing up or log in, your progress is lost if you happen to change your device. A multiplayer mode, which has become a sort of norm these days, is also missing.

crazyDrivers is a decent, fun-filled action video game. Given its small size, it would be unfair to demand sophisticated graphics and elaborate details. Its objective is probably to bring out that nostalgic feeling of the 90s while offering a thrilling experience. To that end, crazyDrivers is a cool new addition to an ever-expanding universe of racing games.

ERH Residents Helps Those Who Look for Sobriety