Write by Hand and Convert into Script with Penquills App

If you are like me, sometimes it’s easier to take notes or jot things down with a stylus on a screen. Typing can get noisy if you are in a room or meeting, and you don’t want to be the one disturbing the peace. The only issue is that once you are done, you hate having to type it all up for use later or for saving. With Penquills, you won’t have to.

Penquills is an app that captures handwritten content and turns it into text. Designed with science at its backbone, Penquills has taken years of research and wrapped it up into an app that can recognize almost any script. You do have to write a bit legibly, at least to the extent that a human would be able to decipher your code. In its latest update, it now works on the iPad Air and iPad Mini, making it even more accessible.

Not only is it a script converter, it also serves as a great note taker and document management system. You can take a file that is a picture of some handwritten note and convert it. You can write your own notes in the app and save them as a text file. You can then take all of these documents and file them away in your own organization system for easy retrieval when you need it. 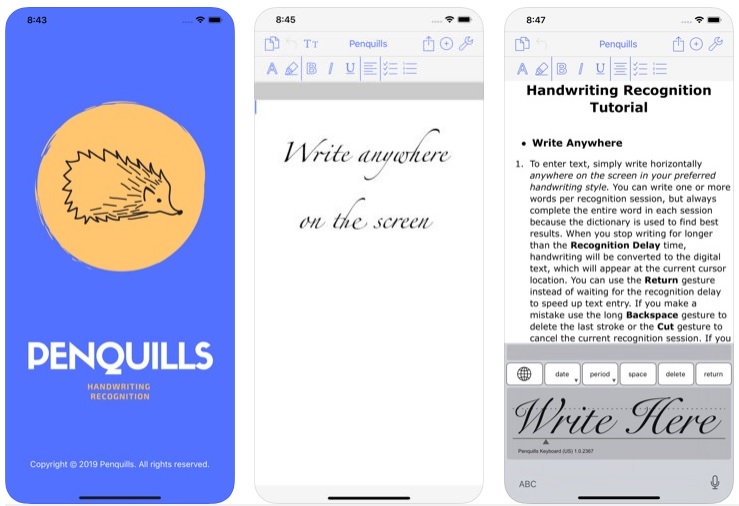 An example of this is the TODAY screen which provides immediate access to documents created today.

Once you’ve converted your text, you can have the app perform spell check to make sure it’s all good. Sometimes a handwritten ‘a’ can look like an ‘o’, and so on. You want to make sure that the conversion went well. In addition to spell checking, the app performs checks based on context, so it will suggest fixes to words based on the topic being covered. How’s that for smart?

Documents can be saved as a PDF or as HTML. The app integrates smoothly with iCloud to support easy sharing and collaboration. Files can also be shared through Box, Dropbox, Evernote, GoogleDrive, and more. Word, RTF and HTML files can be opened and saved as well. Once the app has a file, it can also convert it to another language.

Ease of use is apparent is all aspects of the app. Taking notes, converting them, saving them, moving files around – it’s all intuitive and a snap to do. All you need to do is have the device and a digital pen.

Not much is amiss in Penquills. I’d like to be able to print directly from the app, but there are several quick fixes for that.

In a nutshell, Penquills makes taking notes, either ones you’ve penned or someone else has, and convert them into a format that you can use from a variety of repositories and apps. Take script and turn it to text quickly and correctly with Penquills.

Bruce ClineGames
Block puzzles are fun, but when they are automated and block placement is easier, playing becomes easier and …
END_OF_DOCUMENT_TOKEN_TO_BE_REPLACED