Stellar Patrol – A Wild Trip to Free the Galaxy

I downloaded Stellar Patrol from Google play store. It downloaded quickly and without any hassle. It starts off with an instruction screen which communicates what each icon represents. It essentially presents you details in a graphic which show how to navigate your ship and what the different icons on the status bar represent, They have also indicated which icons you use for the weapons and the radar.

While the getting started screen is well laid out and bold. I found the screen to be a bit too busy and a lot to take in all at once, especially if you are unfamiliar with the game.

You are then moved over to what looks like the landing strip on the mother ship which also seems to be the central setup screen. This screen comes with eight icons. From this screen, you are able to set up your game preferences, select the level of difficulty and personalize the game with a name and password.

The settings page is reasonably easy to understand and navigate. What was absolutely great was that you can choose your language preferences from a number of languages programmed into the game. I like that the developer has taken the time to personalize the game for the players. By setting up the username and password, you can also set up the backup platform for your game. This is a nice touch, especially for the serious players who reach higher levels on the game. Another great point on the setup was that the developer had taken into consideration the players control preference. You can decide the side of the screen that you want the control button situated. 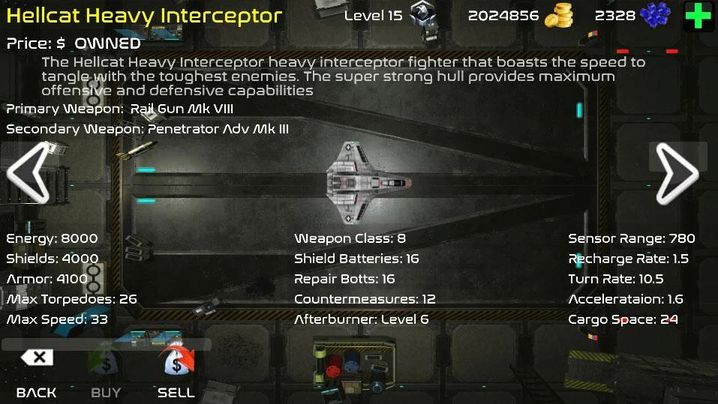 You can upgrade your ship and other utilities with coins collected. While I am not 100% sure how these coins are raked in, I never did too bad in the first few levels. These can be used to improve acceleration, improve energy, purchase weapons and more.
When I downloaded the game, there was a note that mentions the game contains ads, I never came across any.

There is on top of that a ranking which means that you rank against other players on a number of separate points such as experience, a number of crystals collected, missions completed and more. However, to rank, you must personalize and set up a username and password.

Once you are off on your galaxy quest, you get to engage in combat with enemy fighters.

While the game initially describes the quests, it is not absolutely understandable on what you have to do and to level up. The game information mentions solving mysteries but I never came across any in the few levels I played. I tried using the help button but find it takes me back to the original instruction page. I could not figure out what you are supposed to collect as the game progresses, this includes collecting crystals and other elements which convert into weapons and upgrades. While I know I was collecting loot, I am not exactly sure where these go and what purpose they serve. I noted collecting copper, etc. however was not clear on the purpose for this.

The graphics are awesome and very detailed. The music most definitely puts you into galaxy mode. It is without a doubt a grand game with a lot of potential. It hauls you and when you look again, you three levels in and have 13 000 coins. I just think the game needs a bit more instruction with clear, usable details. The developer has focused on all the great aspects but given very little on the logical player instructions.

Bruce ClineUncategorized
We’ve all experienced it. Your iPhone crashes or just gets stuck or you lose it, and then you scramble to …
END_OF_DOCUMENT_TOKEN_TO_BE_REPLACED