If you are like most people who actively engage in social media, you probably are also into taking selfies and sending them on their way, to be shared with friends, family and followers across the globe. Now, there’s a more local way to share and enjoy selfies in a more active way. Enter Selfie Games.

At first, it hints at something that relates to an event of Olympic proportions, but it’s not. Selfie Games is an entertainment app that uses selfies in a game that pulls everyone in and produces a ton of laughs.

The app is free to download, but in order to play the game and get others involved, you must make an in app purchase. This allows you to send out a code for others to enter on their devices so they can join in on the fun. The app supports up to 10 players per game, and requires at least 3.

One great feature on this app is that you can display the game on the TV. This is done by using a smart TV or by creating the necessary connectivity using Chromecast or Fire TV. You can even play on a computer screen or the XBox One, this allows for a variety of media on which to share the screen, so all can see what’s happening. 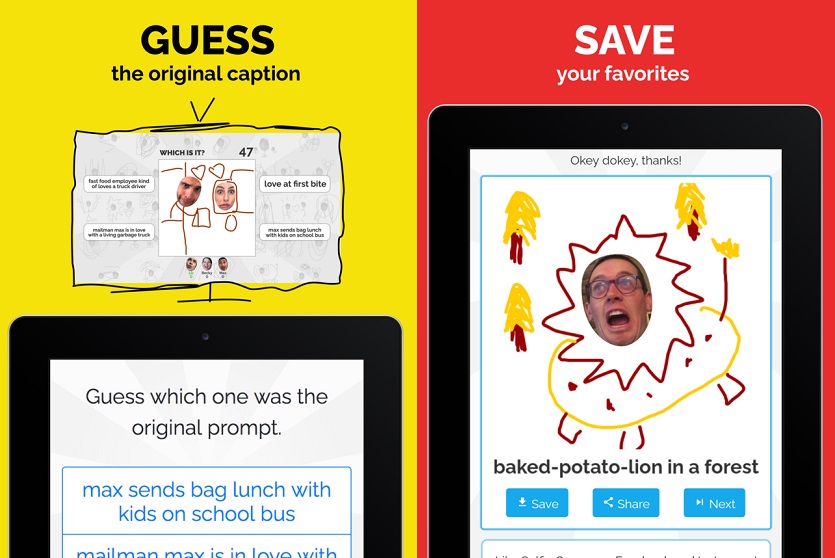 Let’s move on to what the game is all about. The name of the game is Sketchies. The game will send out a prompt to all the players, who then decide what kind of image they want to submit based on the prompt. Then, they take a selfie and doodle around it. After that, they create caption that goes with. Other players must then make their own doodle around the one selfie to try and capture the same prompt and will also provide their own caption. The caption that’s closest wins!

The fun comes in when you start looking at everyone’s renderings to see where their minds went after they read the prompt. The fun grows more when you see the selfies themselves surrounded by quickly drawn doodles. For those of you who are self conscience about your doodles, know that you can erase and start over. Doodling can be done in two colors, too.

Set up is easy. One player creates the game and pays to play Sketchies. Then, they share the player code with others so those players can go to the games website (screen.slfi.tv) or play from within the app.

What would be cool is to share these doodles or even print them on the spot. The app supports saving your favorites, so you know you’ll never lose them.

Try out Selfie Games at your next party. Everyone always has their cell in hand anyway, why not make use of it and have actually engage with each other for a change!

This game is also available on other platforms: Fire TV, Apple TV, Android TV, Windows and Xbox One, iPad and Mac

Post was sponsored by Buzzito LLC, makers of Selfie Games

Bruce ClineUtilities
With all of the hullabaloo that’s surrounding Facebook, it makes you wonder if you really want to share anymore on …
END_OF_DOCUMENT_TOKEN_TO_BE_REPLACED