Miss playing arcade games? Back in the day, malls were filled with arcades and game centers where teens hung out and played pinball and other electronic games. As technology advanced, those games made their way into our homes and hands, becoming easy entertainment that you can take with you.

Bing Bong is one of those games. Simple in nature, it simulates the pinball that would travel around the machine, hitting targets and increasing your score. In Bing Bong, however, you are not catapulting your ball in play across a landscape of obstacles, paths and mazes; rather, the game releases a ball from the top of the screen and challenges you to catch it.

Your only control is a basket that you move from side to side. To move it, place a finger on the bar that sits below the basket. I call it a basket because it’s shaped like a U and is filled with some green liquid. The basket can only move from side to side, so you have to make sure you predict precisely where you think the ball will land, because you want it to land in the liquid and not on the corner or edge of the basket. 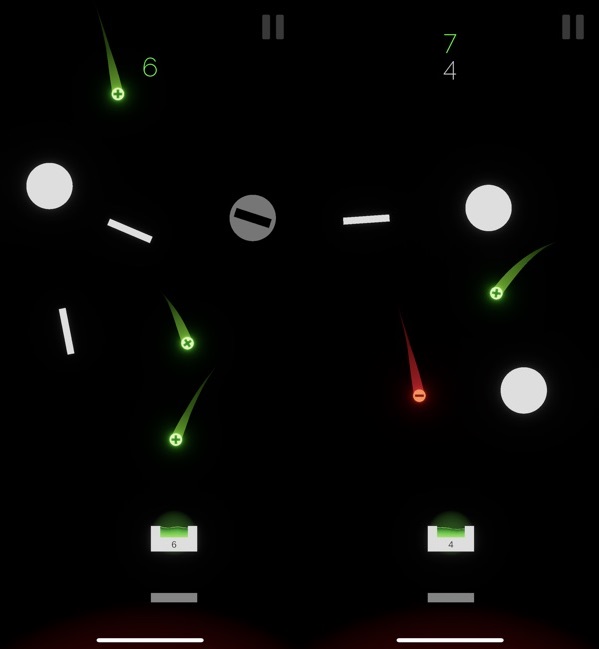 Initially, the ball will be released and there will be no obstacles, which makes it super easy to catch. Please note that they won’t always fall in a perfect straight line. It may fall at an angle and bounce off the side walls. Speaking of bouncing off things – as you complete one game after another, the game will start adding obstacles that the ball will run into or bounce of off, and it may even grow or shrink in size.

One item I almost forgot to mention is the type of balls that you will see. There will be green balls and red balls. You have to aim to catch the green balls only. If you catch a red ball, it’s game over. It’s also game over if you miss the green ball.

As you catch green balls, the count will show on your basket as well as at the top of the screen. The top of the screen also shows the total number of green balls that have been released, so you can see at a glance how well you’ve done. Initially, I was horrible – my hand-eye coordination leaves much to be desired. With practice, you can get better. I know that youngsters out there will get this game quickly and will plow through the levels with ease.

If there were anything I could wish for in an update, it would be some pumped up background music to keep me moving while playing.

As a game that keeps you entertained and on your toes for hours, Bing Bong is great to players of all ages and comes ad free – which makes it even better!

Hidden Objects: Coastal Hill – Mystery Game to Save A Town