I’ve not been hearing much about Pokemon Go, but boy did it cause quite a scurry, with people running around in search of pokemon to collect. Augmented reality is a big thing in gaming, and it’s made headway due to mobile devices. If you like war games and AR, then Domination: Earth is an app you have to try out.

Domination: Earth is a war game where you set out to build up forces and take over the world. In this game, it’s a little different. You pick up the building blocks you’ll need to build up an army, feed and sustain it, and build up your forces by physically walking around and finding things from within the app. Get alerts when you happen to be near something of value, so you can quickly pick it up before another player snags it.

The fun behind the app is that you are playing in the real world. So, as you move around through the day, week, month or year, the game is there, with items to collect and battles to win. As you move around with you iPhone or iPad, you check in from within the app and this syncs you up to the playing field around you. From there you’ll see items and adventures to be had. The AR feature makes this game evolve over time and move with you, which means it never gets old or tiring. 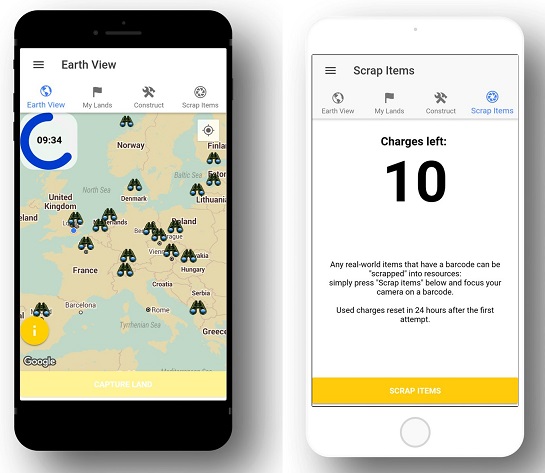 The battling part of the game is just as it would be in other war game apps. The real difference and what makes Domination stand out from the rest is how it encompasses where you are into the game. You will build mini empires where you are and, if you’re smart, you’ll build alliances with neighbors to help you secure your borders.

If you travel abroad, know that the game will go with you. Once you’ve arrive in a new location, open the app and check in to see what’s out there. Somewhat similar to geocaching, but more on a domination scale, rather than a search and share.

Item scrapping is another feature I’ve not seen in other games. With this you are basically scanning random barcodes of items around you. They can potentially find their way into some use in tools you use, things you build and more. The items could be books, magazines, food items, and more. Anything with a barcode will work.

If you travel overseas, you can secure a new location for your troops to invade. This requires checking in at least five times in this new location. It truly makes the game realistic and interesting.

What would be nice to have is faster location updates. I have a pretty new iPhone, and the app still lagged in updates, which meant longer wait times to see what was around that was worth fighting for.

The game itself is pretty cool by nature, and can use some improvements, but is certainly worth a try if you’re looking for something new to do and you’re one who likes to get around.

Get Rich with The Money Pouch

Bruce ClineUtilities
Most of us don’t have a lot of time to spend on researching stocks, ETFs, the market, and anything else …
END_OF_DOCUMENT_TOKEN_TO_BE_REPLACED